Travis McMichael took the witness stand Wednesday in his murder trial over the February 2020 killing of Ahmaud Arbery, as the defense launched its phase of the trial. The prosecution rested its case on Tuesday.

“I want to give my side of the story,” McMichael said, telling the court that he wanted to explain what happened from his point of view. He is one of three defendants.

Under questioning by his attorney, McMichael said his training from his Coast Guard service included deescalation techniques — and concepts around the use of force.

“In your experience, can pointing a gun at somebody deescalate a situation?” Sheffield asked.

“If you pull a weapon on someone, from what I’ve learned in my training, usually that caused people to back off or to realize what’s happening” and comply with orders, McMichael said.

In response to the first question from his defense attorney, Jason Sheffield, McMichael affirmed that he’s aware he isn’t required to testify in his defense. Sheffield then asked him about the Satilla Shores neighborhood where he lives, and where McMichael and his father, Gregory, chased Arbery in a pickup before Travis McMichael shot him with a shotgun.

McMichael described the neighborhood as friendly — but he added that he would hear of thefts and other crimes every couple of months. His own car was broken into numerous times, he said.

“It got to the point where I would just leave the thing unlocked,” McMichael said.

With these questions, the defense is seeking to bolster its depiction of Satilla Shores as a neighborhood “under attack,” beset by a stream of crimes.

By early 2019, McMichael said, it became common for neighbors to compare stories of cars being broken into, either in person or on a neighborhood watch Facebook page. He and his relatives often reminded each other to lock their doors, he added.

McMichael discussed his use-of-force training in the Coast Guard

Sheffield asked Travis McMichael about his stint in the Coast Guard, a time when McMichael said his main job was as a mechanic — but his duties also included law enforcement and search-and-rescue operations, he said.

McMichael described being trained as a boarding officer at the Maritime Law Enforcement Academy, adding that the role gave him arrest powers in the Coast Guard.

His attorney then asked McMichael about his training in the use of force, including the “use of force continuum,” ranging from the first level, such as an officer showing their presence, to the sixth level, “deadly force.”

Travis McMichael told the court Wednesday that he wants to give his point of view about what happened on the day Ahmaud Arbery died in a neighborhood in the Brunswick, Ga., area. 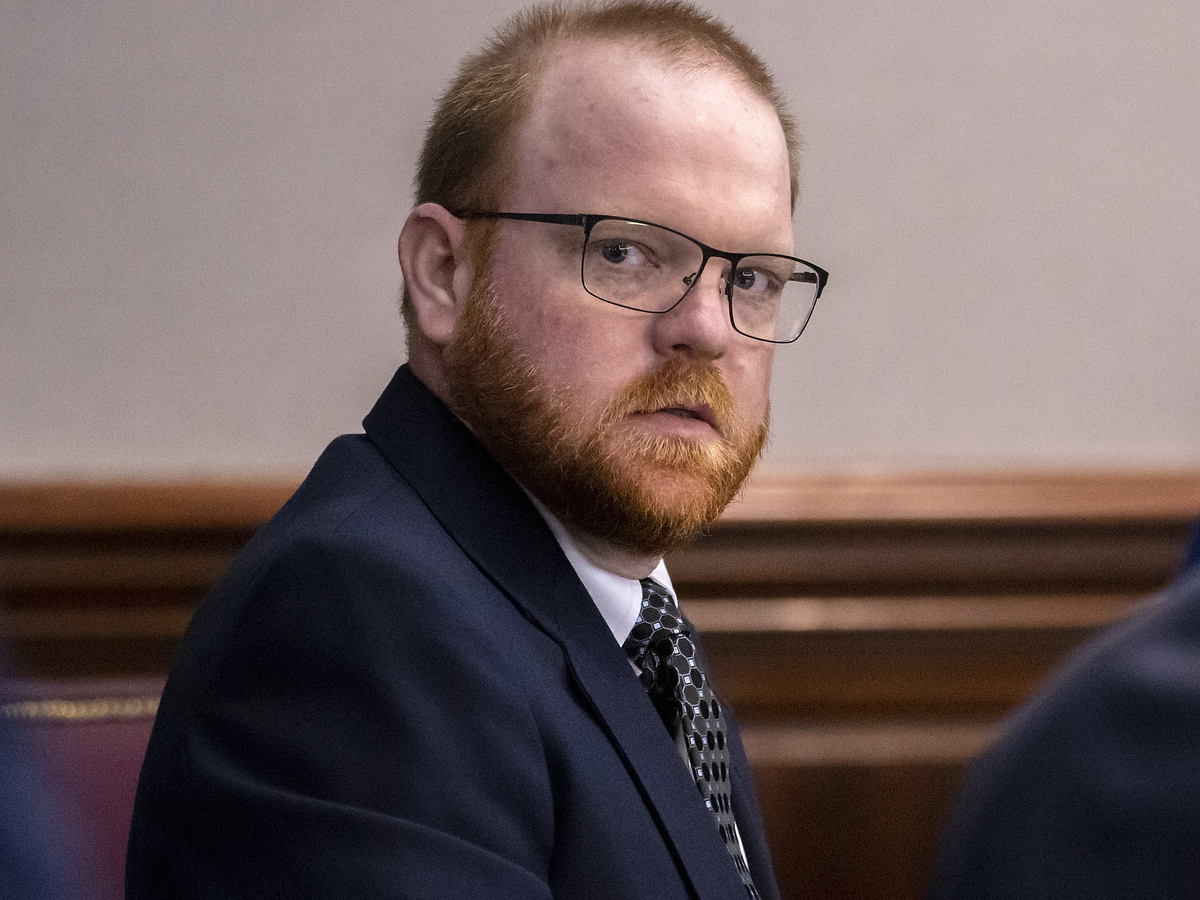 Travis McMichael told the court Wednesday that he wants to give his point of view about what happened on the day Ahmaud Arbery died in a neighborhood in the Brunswick, Ga., area.

McMichael said that while he had frequently used the methods in the lower steps of the use of force continuum, he never used a baton or employed deadly force while in the service.

He also spoke about how drawing a weapon can sometimes deescalate a situation, particularly if it’s pointed at “anybody that is causing the threat — or that may be the threat at that time.”

Before the trial began, defense attorneys had planned to put law enforcement experts on the stand to testify about concepts such as the use of force and probable cause. But prosecutors successfully moved to prevent that, saying such testimony was irrelevant because the McMichaels and their neighbor, William “Roddie” Bryan, weren’t acting as law enforcement officers when they pursued Arbery.

In granting the state’s motion, Judge Walmsley cited a precedent that established jurors can take the same set of factors as an expert would consider and make an “equally intelligent judgment of their own.”

McMichael said he has previously displayed a gun to protect himself

Over the prosecutor’s objection, McMichael discussed two instances in which he displayed or pulled a gun to protect himself, outside of his Coast Guard duties. The state had said those events weren’t relevant to the current case; the judge allowed the questioning, saying the prosecution could take it up in their cross-examination.

McMichael said both of the instances occurred when he was living in Pascagoula, Miss., the first in 2008.

In the first example, McMichael said two men tried to take his money while he was using an ATM. He had a concealed-carry permit for a gun, he said, and when he lifted his shirt to show the men his pistol, they fled the scene.

The second example dates from 2011, when McMichael said a man barged into his pickup while he was stopped at a red light. In that instance, he said, he drew his pistol from a holster and ordered the man to leave him alone.

What are the charges McMichael faces?

The June 2020 indictment accuses the men of using their pickup trucks to chase and assault Arbery before killing him with a 12-gauge shotgun.

Who are the defendants in the case?

Gregory McMichael, 65, worked in law enforcement for decades, including a long stint as an investigator for the district attorney’s office in Brunswick. After spotting Arbery, McMichael later told police, he grabbed his .357 Magnum pistol and told his son, “Travis the guy is running down the street lets go.”

Travis McMichael, 35, shot and killed Arbery with a 12-gauge shotgun after chasing him in his Ford F-150 pickup. He is a former member of the Coast Guard.

William “Roddie” Bryan, 52, is the neighbor who jumped into his Chevrolet Silverado pickup to help chase Arbery. He used his cellphone to record video of the final moments of the confrontation.

Ten weeks passed between Arbery’s death and the first arrests in the case, after a video of the killing became public.